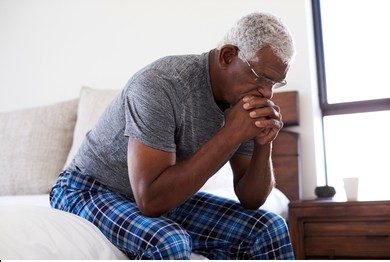 Leaving the bar past midnight after a time out with the boys, Francis waltzes to his Porsche ride gets in, and drives off. A picture of suave sophistication,  he looks an epitome of success owning a conglomerate of viable businesses. He arrives home to an empty living room and checks the kitchen to find his meal in the microwave. In anger, he punches the wall and walks to his bedroom where he shouts his wife out of her sleep asking why his food is not freshly cooked. In anger, she responds to him asking how he comes home late to expect to find her awake preparing a meal. In a fit of anger, he punches the pillow next to her and stutters about how women are ingrates and worthless. Picking a Moet from the fridge, he hits the bottle and sleeps on the couch – one of many nights in a row.

You see, Francis has a flip side of what is referred to as mummy issues. Having been abandoned by his mother as a young boy, he views women with suspicion and distrust, and though, seemingly happily married, the slightest provocation from his wife brings out the bitterness and pain of abandonment which he disguises as aggressive anger. Francis is depressed from years of suppressing his bitterness and pain. His successful and flashy lifestyle is a smokescreen to cover his highly depressed state.

Though not immediately recognizable as depression,  aggressive anger is a sign of depression in men. Although men are as likely to become as depressed as women, depression is more obvious with women. This is because, in women, it manifests outwardly in form of mood swings, binge eating, weight changes, and menstrual irritability.

Stress, sickness, and major lifestyle changes are some of the triggers of mental depression. Peer pressure and cyberbullying can also lead to mental depression especially in adolescents. However, while some depressive states cannot be clinically diagnosed, most people suffer from depression and overcome it without any negative side effects while others need to seek professional counseling to come out of theirs.

That depression starts around 32.5 years of age and is prevalent in adults between 18 and 25 years old. 8.7% of women have depression while 5.3% of men suffer depression. According to verywellmind.com, depression is the leading cause of disability worldwide. The total economic burden of depression is estimated to be $210.5 billion per year. 48% to 50% of the economic costs are attributed to absences from work as well as decreased productivity caused by depression while 45% to 47% of the costs are due to medical expenses, such as outpatient and inpatient treatment or the costs of medication.

Depression is treatable and can be overcome. The first step is acknowledging that it is real and facing the facts then getting professional help to get out of that depressive state.